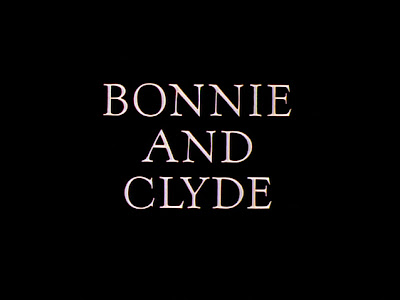 A few photos that look like they belong in the same album as the photos from Butch Cassidy, a couple quick facts about our heroes up until the opening shot, and we're off into Arthur Penn's 1967 hit Bonnie and Clyde. I had seen this once before in college and marveled at how modern it still feels but I took something very different away on a second viewing.
Company: Kecia, roommate and Warren Beatty's other wife; Alex, also amazed by hotties and their hotness

Cuisine: vodka, orange/pineapple juice and a little Rose's Lime; and Cheddar Blast Pringles. What about it? 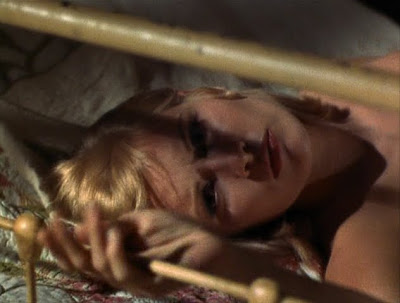 This movie begins with one of my favorite opening scenes on this list so far: Bonnie Parker (Oscar nominee Faye Dunaway, so young!) is a lonely waitress in her bedroom, bored senseless. In just a few simple moments, Dunaway expresses the entire character, banging on the bedposts (as Kecia said, "Foreshadowing! Behind bars!") and falling hopelessly onto the bed, longing for something exciting to come into her life. To open a film like this is so risky -- open with a bang, the crowd shouts! -- but the whole point is that Bonnie's existence is a quiet one thus far, and she wants out. And just on cue: who's outside attempting to steal her parents' car but Clyde Barrow (Oscar nominee Warren Beatty, so handsome)! 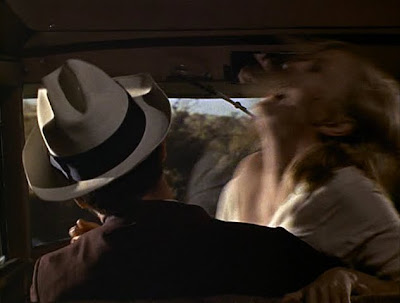 "This is so hot already." -- Kecia
Intrigued from the get-go, Bonnie rushes outside to meet this handsome stranger, and within a few minutes she's off and running with him, barely able to keep her clothes on, escaping in the newly-stolen car on Clyde's lap, and barely allowing him to drive them to safety. But it's her first step in a new life of taking what she wants, when she wants it. In a second, her entire previous life is erased, and she is soon The Infamous Bonnie Parker (Parker and Barrow were real small-time crooks in the 1930s).

Clyde's been doing stick-ups for a while, but now the duo has strength in numbers. Their first couple of efforts, however, are bungled and not that lucrative. They're not the brightest crayons in the box ... yet. Soon they hook up with a disgruntled gas station attendant, C.W. Moss (Oscar nominee Michael J. Pollard), Clyde's brother Buck (Oscar nominee Gene Hackman) and his wife Blanche (Oscar winner Estelle Parsons -- that's FIVE nominees in one movie!), and things pick up a little bit. 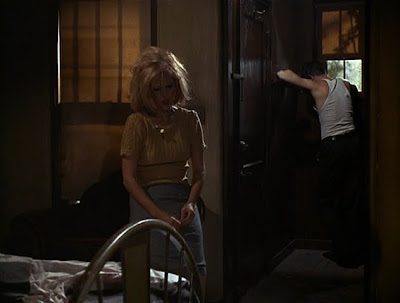 Things don't quite according to plan, however -- at least not Bonnie's plan. Her sexual advances on Clyde are not reciprocated and she grows frustrated. I would too -- I give up everything to follow you and you won't give me anything back? -- but at the same time, he never asked her to take up with his gang. And the audience wonders: what's the hold-up, Barrow? She's cute, she's throwing herself at you, and she helps you make sackloads -- give it up! But I get the sense that Clyde's been down this path before: how many other Bonnies have there been before Ms. Parker? How many other girls has he fallen for, just to have them desert him and his life on the lam? That might not be the reason, but it's the one I could come up with. 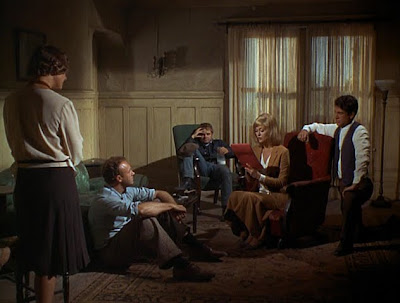 Five Oscar nominees in one shot! I don't know if this has ever happened before or since.

The first half of the film functions somewhat as a comedy, a wacky crime caper with stock(-ish) characters and zany antics, but slowly the tension escalates as Bonnie grows tiresome of Blanche, whose response to chaos is often running around screaming with a spatula in her hand. Things were easier with just two, but with five the getaway car's a little more crowded, and Penn does a great job of keeping all five of them in the shot while in the car, letting his audience register all five performances simultaneously and see this web of independent people depending so intensely on each other. 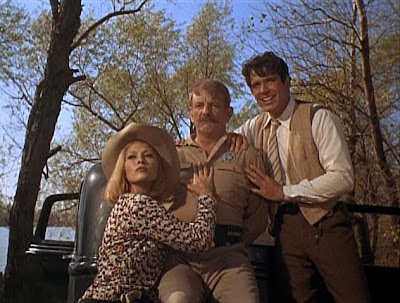 One of the most memorable scenes is one in which the Barrow Gang is nearly caught by Captain Frank Hammer, but avoids capture and turns the tables on the poor guy, posing for photographs with him to send to journalists. Hammer makes what could be a fatal mistake by bravely spitting in Bonnie's face, and though the boys could kill him, they hilariously trap him bound in a canoe and shove him into a lake. Ever so slowly, the world is closing in on these characters -- they can't keep eluding authorities forever, but the way they galavant cross-country, kicking ass and taking names, it looks like they think they can, and will. 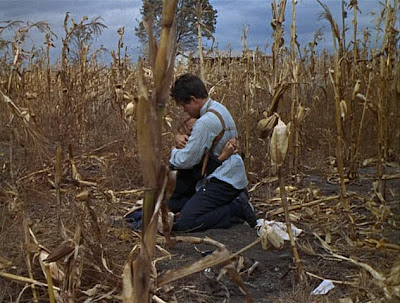 A major turning point comes when Bonnie's homesickness takes over and she demands to see her mama. She attempts to make a break for it, but Clyde chases her down and they cling to each other (each for different reasons) in a corn field. The shot above is lovely -- it's the autumn of their relationship.

All the performances in the film deserve mention but one great cameo comes from Mabel Cavitt who plays Bonnie's mother as an old crone, nearly blinded and foretelling doom. "You best keep runnin', Clyde Barrow," she breathes, as Bonnie acts like her mortality and the longevity of her gang's career had never occurred to her. This is the moment the movie shifts for me, and suddenly it becomes a dark meditation, not on consequence, but on the loss of innocence. You can run from death, from capture, from life, but you cannot hide. Even more powerful, America was sending more and more troops to Vietnam each day when this film was released. No one yet knew how long, how hopeless the war would be, and how disillusioned the youth at whom this film is aimed would become, but like Mrs. Parker, the film foretells doom. Art becoming life, lambies. Art becoming life. 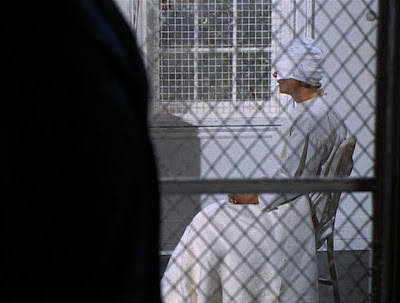 Now it's all right for Bonnie to have this revelation: she asked for it, and she's got it coming. But C.W., Buck and Blanche didn't really ask to get swept up in this, and each of them have very different and distinct fates awaiting them. The scene above is harrowing -- Blanche, recently blinded in a shoot-out that leaves Buck dead and her abandoned by the other three remaining gang members, is grilled, quietly and maliciously, by local law enforcement and tricked into revealing C.W.'s identity, thus far unknown by the media, and thus setting the stage for the final showdown. But her desperation to understand what's happened and despair at losing Buck and losing her own life is heartbreaking. She's been a silly character until now, and I guarantee you this is the scene that clinched that golden man for her. Well done, Miss Parsons. 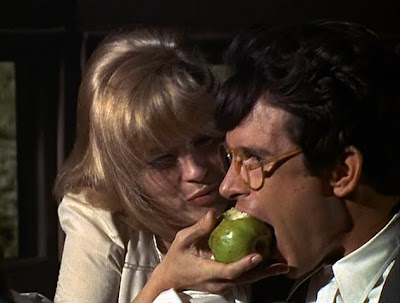 Abandoned once again, Bonnie and Clyde recognize their own mortality and finally take that final step, making love in a corn field. While this would normally be a cause for celebration, it's so somber and sobering for both of them, finally owning up to their mistakes and recognizing that they have very little time left. I think that must be what that pear's about in their final drive -- simple pleasures, sweetly savored. Neither one knows exactly how it will end, but they both see now, finally, that it must. And it does, violently and horribly, but not before one last glance, one last meaningful look, interpreted however you want -- but for me, I saw in their eyes: "This is it, but I wouldn't change it for anything." That's the romance, and that's the brilliance of the movie. It's not a perfect film, but each time I see it it gets (and I think it will get) better. Bravo!