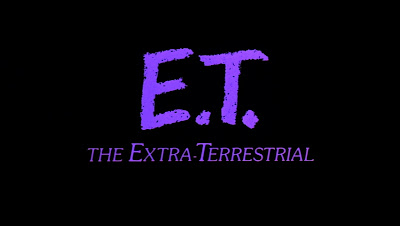 My childhood was somehow deprived of several children's classics, including Steven Spielberg's classic fantasy from 1982, E.T. The Extra Terrestrial. I only managed to watch it a couple of years ago, but by the time I rewatched it for this project I had forgotten most of the magic of it, so it was like seeing it for the first time all over again. It made me want to revisit a lot of movies I haven't seen for even longer.

Company: Stephanie, little sister who would have seen this with me when we were wee ones had we been exposed to such things

Cuisine: both of us had just gorged ourselves on Polish cuisine at Nye's Polonaise Room (once voted Best Bar in America) for our mom's birthday, so I was too full to do much of anything except nurse a Diet Coke... though a humongous bowl of Reese's Pieces would have been appropriate. 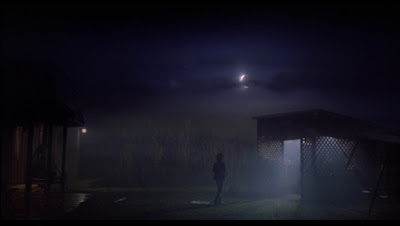 To begin, Stephanie made an interesting contextual point about this film coming on the heels of Ridley Scott's Alien only a few years earlier, in which a hostile alien viciously maims nearly the entire crew of the cargo spaceship Nostromo and leaves only Sigourney Weaver alive. E.T. manages to carve out its own alien life form on the opposite end of the hostility scale. Perhaps even more relevant are comparisons to be made between this and Spielberg's earlier alien flick, Close Encounters of the Third Kind, which I'll discuss later.

The story here had autobiographical roots: Spielberg, a lonely child after his parent's divorce, created an imaginary friend to help him cope, and combined that personal history with a stalled alien-movie project called Night Skies, a sequel to Close Encounters envisioned by Columbia that Spielberg had no interest in making. Because of this link, the film is just as much psychological drama and reflection of the loss of childhood and innocence as it is a science-fiction thriller. 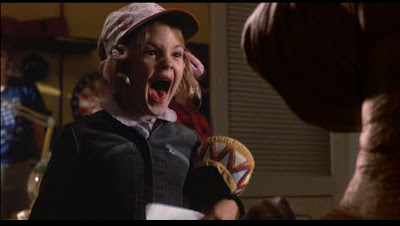 Elliott (the wonderful and unaffected Henry Thomas, ten at the time of filming) is a lonely middle child in a suburban area, barely noticed by his harried mother (Dee Wallace), picked on by his older brother Michael (Robert MacNaughton) and his cronies, and passed over in the Cute Olympics by his little sister Gertie (a six-year-old Drew Barrymore). No wonder he's lonely and just wants to join in the older kids' game. Sent outside to retrieve a pizza delivery, he first encounters the unintenionally abandoned alien, which he adopts, lovingly dubs "E.T." and introduces, with some hesitation and illicited promises of secrecy, to his siblings.

Much like To Kill a Mockingbird, this is a child's world from a child's point of view. Spielberg even makes a point not to show any adults from the waist up, excepting Elliott's mother, as an ode to the cartoons of Tex Avery. If Elliott's mother wasn't so oblivious to the alien's presence in her home, she might have turned it over to the authorities, which is exactly why Elliott and his brother and sister keep it a secret. Adults don't understand. 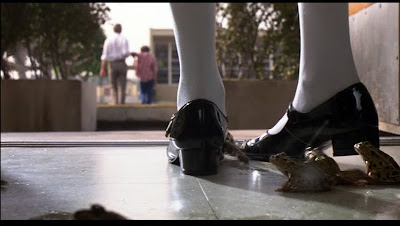 And maybe with good reason: if your mother found out you were experiencing a psychic (and drunken) connection with an alien that was making you free all the to-be-dissected frogs in your science class and man up enough to kiss your crush right on the lips, she'd probably be a little concerned too. But no harm comes to anyone who encounters E.T.: quite the opposite. The spliced scene where we see the alien mistakenly drinking himself into a stupor (and watching This Island Earth!) and Elliott's psychically drunken crusade to set free the prisoned amphibians is blissful cinema, visually glorious and hilarious. The shot above is just incredible to me: Elliott's being led away for his misbehavior and brazen kiss, and in a single pivot from the toe, we see the girl's entire, specific reaction to him. Not that we ever see her again; that isn't the point. We certainly think they'll have a history after the events of this film, but for now, Elliott's got bigger (umm.. smaller) things to think about. 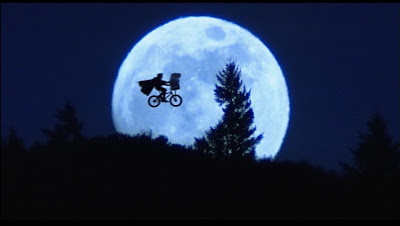 As he proved with Jaws, Close Encounters of the Third Kind and Raiders of the Lost Ark, Spielberg makes magic onscreen. His cinematography inspires a return to childhood for even the most stubborn adults, and he does it rather simply in these high-concept films. This is in no small part thanks to the sublime score by John Williams, who gives the sparkly an extra sparkle, making small events with children and a tiny alien seem bigger than life. I mean, what really happens in this scene? An alien uses telekinesis to lift himself, Elliott and a bike into the air. On the page it wouldn't seem so magical, but Spielberg and Williams combined make us believe suddenly that if what we're seeing can happen, then anything and everything is suddenly possible. If we just clap our hands, as Mom reads to Gertie, quoting J.M. Barrie, we can prove that we do believe in fairies. 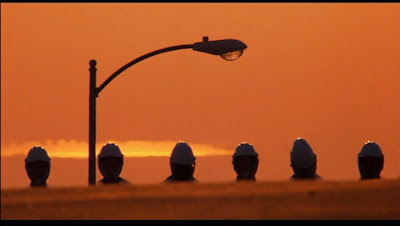 This shot looks somewhat familiar.
But the threat of adults discovering E.T. approaches. Damn them and their metal-detector-looking machines that can track aliens! These scientists, faceless, nameless and nearly anonymous, are portrayed as believing, as adults are wont to do, that they know better what to do with an extra-terrestrial. And while E.T. is certainly weakening before the government snatches him, he certainly doesn't get any better under their care. 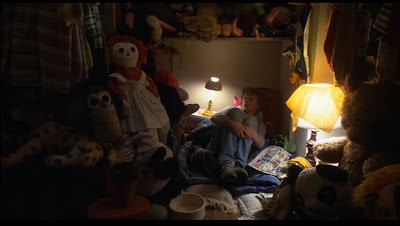 "This movie is about people falling asleep in weird places." -- Stephanie

The film's first hour draws us in with the humor that arises out of miscommunication and naivete, but suddenly it becomes a powerful tale about the loss of childhood and growing up very fast. Each of these children forges a very specific connection with the alien. Gertie, only six, imagines him mostly as a plaything to dress up in silly outfits, but what six-year-old wants more than that? An animatronic toy that will play with you back? Michael, the eldest, is stuck somewhere between childhood and adulthood, simultaneously wanting to keep the alien to play with forever and knowing the mature, rational thing to do is to send him back to where he came from before it's too late. As pictured above, Michael wishes he could recede back to childhood and just hide with all the toys. A beautiful reflection. 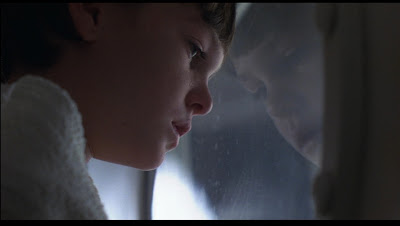 But it's Elliott, the original explorer, who forges the deepest bond, and mourns E.T.'s apparent passing with the greatest sense of grief. Elliott is a distant cousin to Roy Neary in Close Encounters in that he barely understands the power the alien holds over him, and yet he is motivated to care for it and protect it. Their connection was so strong that at some point Elliott starts referring to himself as "we." And can you blame him? The kid is weird, doesn't have many friends, if any, and is almost virtually ignored at home, with a distant mother and an invisible father in Mexico. But when he suggests that he and the alien could "grow up together..." -- oh my god, I nearly lost it. The most basic human longing for connection, for a friend, so poignantly on display in what could easily just be pegged as a fantasy.

E.T. is magically reanimated -- because his friends are on their way? because Elliott declares his love for him? are they interconnected? -- and rescue leads to the film's inevitable and heart-wrenching climax. 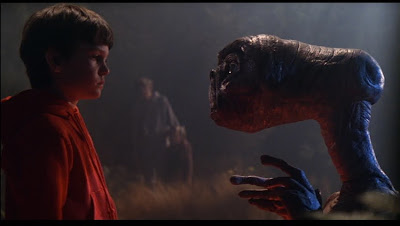 Richard Attenborough, winner of 1982's Best Picture race with Gandhi, predicted that Spielberg's fantasy would and should have beat his biography for the top prize that year. "It was inventive, powerful, [and] wonderful," he generously conceded. "I make more mundane movies." E.T. ended up winning for its score, sound and visual effects, and became a commercial success that out-grossed even Star Wars (hilarious because E.T. is at one point inexplicably drawn to a kid in a Yoda costume). It's easy to understand why: it appeals to a lot of different demographic, and stands alone (perhaps only beside Toy Story) on this list amongst the movies that still awaken the wide-eyed child inside you.

Wikipedia-ing this film brought me peripherally to a list created by the British Film Institute of the top 50 films you should see by the age of 14. I've seen just under half of these -- perhaps a good project for the future! Read the article also for the interesting comparisons to the Christ story and allegorical implications which I won't recite verbatim here.

Next up: heading back in time to the dust bowl with Henry Fonda in The Grapes of Wrath.
Posted by Max at 12:00 PM


NOTE: I am not taking credit for any movie images posted on this blog. All of the images are from films that are protected by copyright and their usage here is not intended for infringement.