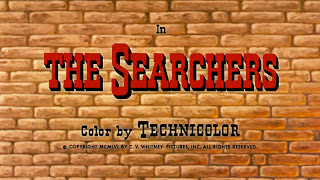 Only one more Western to go! I've made it abundantly clear that this genre rarely tickles my fancy, and John Ford's 1956 John Wayne vehicle The Searchers is no exception. For me it's just another example of a tired, worked-over plot dressed up in beautiful scenery and machismo -- and while the Technicolor is vivid and brings out the color in this dirt-weary world, it doesn't do much to tell the story, if anything.

Company: Mom, not much of a movie watcher but remembers this kind of serial Western from childhood; and Mike, who not only grew up on John Wayne's movies but grew up in the beautiful mountains of Montana and has a sort of reverence and excitement for this genre that I just don't

Cuisine: we watched this on an unexpected evening off from potato harvest, and Mom cooked up steak, baked potatoes and a spinach salad -- perfect on a fall evening! 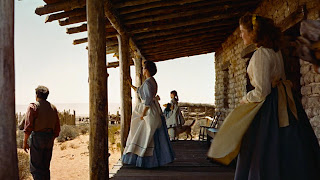 This kind of static, rhetorical question opens the film, set in 1868 in northern Texas, just after the Civil War. Ethan Edwards (John Wayne) returns home from fighting for the Confederate South and getting himself into trouble for three years afterward. He's a dodgy character, but the kind of guy you'd maybe want at your back in a bar fight. A cowboy. 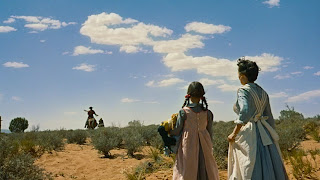 As soon as he's arrived to see his family once again, he heads out to a neighboring farm to investigate some stolen cattle. The virtuous, swaggering cowboy is for all intensive purposes our protagonist (duh, it's John Wayne). 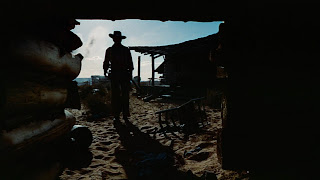 When he returns, he discovers that the stolen cattle were just a diversion by a local tribe of Comanche Indians to lure him and other men away from their homestead. He returns to find many family members dead (including the one, never seen, incinerated in a outdoor fireplace pictured above) and two of his nieces abducted. Oops.

The rest of the film follows the searchers (!) in their quest to find the girls and rescue them from the tribe. It's a sign of the times that the Comanche are not personalized at all and their reasons for abducting the girls is irrelevant -- it's the 1950s, everyone: Indians are the bad guys. 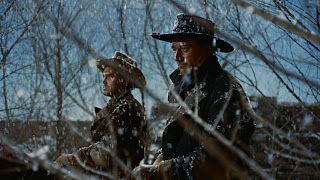 Ethan and his adopted nephew Martin (a very good Jeffrey Hunter) are on the hunt for an indeterminate amount of time, but snow begins to fall and you definitely sense the frustration growing. When the elder sister Lucy is found murdered, despair sets in even deeper. Perhaps the thematic parallel here is the undying American spirit, that the men never truly give up, even when it seems completely hopeless to continue searching for the surviving girl. But when they do find her, Ethan is prepared to gun her down in cold blood rather than allow her to continue life with the Comanches. 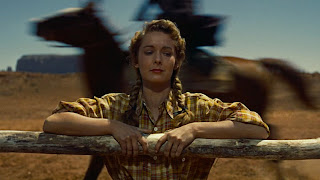 We're also privy to the underlying romantic tension between Martin, who's gone for a long time, away from Laurie (Vera Miles), the girl next door in love with him. The women stay home and read letters and weep on uncomfortable-looking sofas while the men ride horses and shoot at things. And the comic foil in the film is the guy who makes fun of Indians. Westerns! 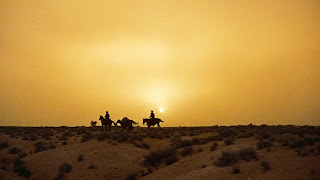 I've said before that I honestly believe a big part of the reason why films like The Searchers made this list are not because they're particularly well-made or interesting, or even that they were rewarded at the time for being well-made or interesting (The Searchers was shut out at the Oscars that year) but because the old men of the AFI remember loving these films as children. Now, I'm currently in rehearsals for a production of The Wizard of Oz (coming up soon on the list!) and in talking about that film, probably the most-seen film in America, I realize that nostalgia is a remarkably strong and totally valid criterion for film appreciation. Things that were important to you as children totally shape who you are as an adult, and if you don't grow up loving Westerns, it may not be so wrong for you to not grow to love them after your formative years. Right? This is the justification I'm making. 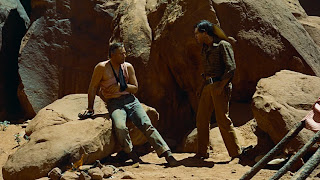 Still, the film's moral center (men being compelled to save women from being indoctrinated by Indians) feels totally outdated in our politically correct, post-feminism world. Is it a historically significant time period? Sure. Are we proud of the fact that these men are racist and misogynistic? Of course not. Should this film then be banished from our minds because our modern sensibilities have changed? I suppose not. But that's my point with Westerns: they operate on their own sort of logic, a logic that's created by the heroes and challenged by the villains, and that logic -- the logic that the whole film hinges on -- seems clunky and useless now. 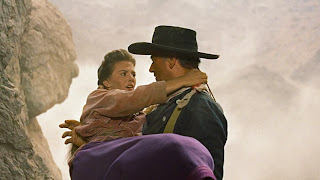 When the remaining, surviving niece, Debbie (a young Natalie Wood) is saved from her physical and mental bonds of Comanche wifehood, Ethan mutters, "let's go home, Debbie" -- and I imagine the audience in 1956 probably cheered. The girl was safe, the family was back together again. The bad guys were vanquished, the good guys are a little wiser and more prepared for next time, and I? I cheered, but it was because the movie was over.

No more Westerns -- I've vanquished them! You can stop holding your breath for a Western retrospective, that's for sure. :)

Next up: Charlie Chaplin's back at it in his final film, City Lights.
Posted by Max at 8:02 AM