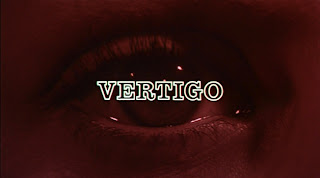 Oh Hitchy. Surprising us all, reminding us how much better your films are than we remember. So far we've seen Rear Window, North by Northwest and Psycho on this blog, and now, from 1958, Vertigo, based on the French novel "D'entre les morts" (or "The Living and the Dead") by Pierre Boileau and Pierre Ayraud. Four movies in the top 100 of all time?? That says a lot about this director, who is always at the forefront of his films, for better or worse. Nearly always better. What's the first detail you remember about these films? Not the stars, certainly, although they're brilliant. It's always Hitchy. 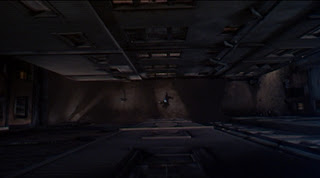 The film is instantly terrifying, setting up in a quick expository sequence the fear of heights that cripples Scottie Ferguson (Jimmy Stewart, whose imitable voice can't catch a break in this room, especially when it comes to It's a Wonderful Life), a haunted detective who retires in shame after his phobia inadvertently causes the death of a fellow officer. A rooftop chase ends with this haunting vantage shot, perfectly lit.

Well, he may not be able to climb tall buildings or leap far enough to clear an alleyway, but he can still do detective work, right? Well sure, says his friend Gavin Elster (Tom Helmore), who suspects his wife Madeleine (Kim Novak) is cheating on him. 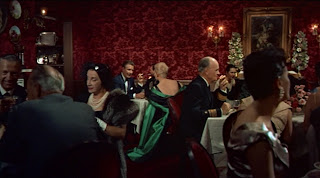 She's the one in the green dress. Naturally.

Kim Novak gives away as little as possible as the mysterious femme fatale, driving us crazy wondering what she's up to. Her smoky eyes are so devoid of emotion, so vacant, that it's impossible for us to decipher what the hell she could possibly be up to. Luckily, we have Jimmy Stewart acting as our stand-in throughout the chase, guiding us through the story, knowing what we know and learning what we learn when we learn it. Is there a word for that type of protagonist? There must be. 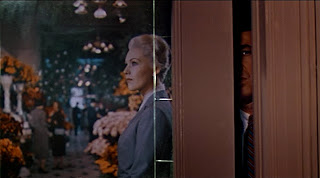 She goes to flower shops, museums, bayside ledges, all seemingly in a daze. Is she possessed, as her husband suspects? Is she harboring other secrets? This entire mystery would be difficult for us to crack even without Scottie's gradual but inevitable fascination with the mysterious Madeleine. His judgment becomes clouded by his attraction to her, and soon he's as caught up in it as she is. It's the dizziness of infatuation that draws him to her, even though he suspects -- maybe even knows -- there's something that's not right about her. 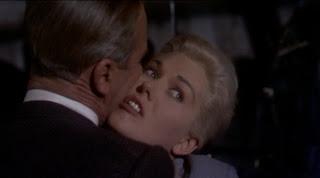 "One is a wanderer, two are always going somewhere."
"No, I don't think that's necessarily true."

I love this exchange: that aversion to company, to companionship... or to the idea of purpose. Two people aren't always going somewhere. In this case, one of them is walking into a trap. For both Scottie and Madeleine, the difference between intimacy and great distance is communicated in this glance above, the longing for love and safety and the acceptance of the inevitable. It's real heavy. There's also a great moment where Scottie mentions that "the Chinese say that once you save a life, you're responsible for it forever." What a great justification for your compulsion: a sacred duty to protect life. The stakes could not be higher than that. I don't want to spoil too much of the delicious puzzling plot, but let's just say it involves a spirally bell tower. 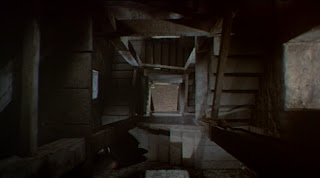 Without talking about the plot too much, it's difficult to explain much of my admiration for the movie, but let's talk individual pieces. Once again all the elements are given such grand showcases, including Bernard Herrmann's circular score, spiralling back on itself and brilliantly underscoring the endless wanting to solve the mystery. Hitchcock also creates some of his most fanciful imagery in this film (the fantasy sequence below being the most singular of them), which he would continue to explore in his next two films North by Northwest the next year (1959) and Psycho right after that (in 1960). Man, what a streak! 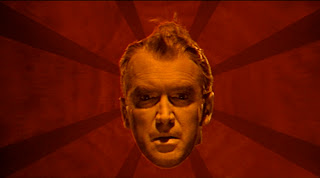 No matter what, you do not want Jimmy Stewart's psychedelic head floating ominously toward you in a movie. It cannot portend anything good. 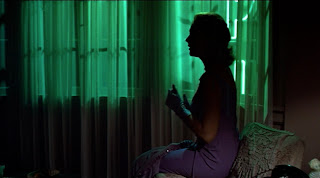 I had a feeling as I went up this list that the further up I got, the harder it would be to write anything original or interesting about these films. What hasn't already been discovered, explored? And more, what can really be written about Vertigo? It's a brilliant film, different from the others in so many ways but maybe not my very favorite. Still, so much to recommend and obsess over the way Scottie does upon later re-viewings.

This is a pretty incoherent entry. I'm getting squirrelly thinking about the end of this blog. What do you do?

Next up: Schindler's List. Well, yeah. That would make sense, wouldn't it? Til then, chummies.
Posted by Max at 9:07 PM